HomeEntertainmentArtSpiderMAV Is the Drone That Shoots Thread to Stabilize Itself
EntertainmentArtTechnologyLifestyleGeekGeneralNewsPhotographyRoboticsScienceVehicles

SpiderMAV Is the Drone That Shoots Thread to Stabilize Itself 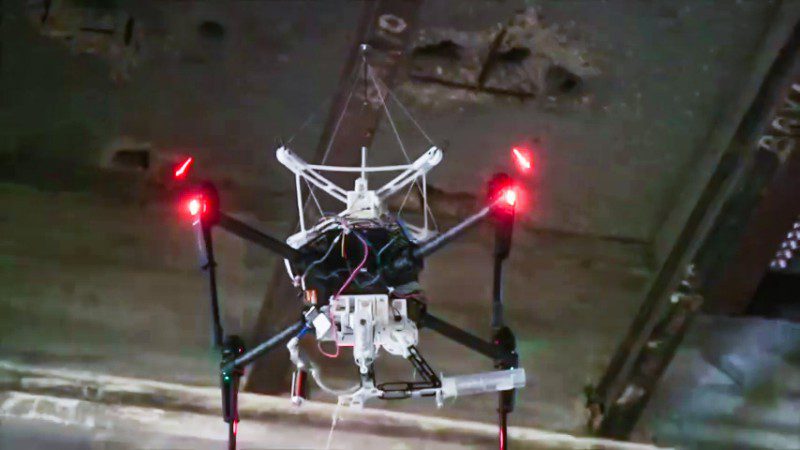 London, UK — Not all drones have a perfectly stable balance in mid-air. Sometimes this is because budget products are using cheaper parts, and sometimes it’s merely the design of the product or because of strong winds working on the drone. The SpiderMAV is a drone concept that tries to increase mid-air stability inspired by, you guessed it, spiders.

The SpiderMAV (Micro Aerial Vehicles) is an idea from the Imperial College London and was a collaboration of Ketao Zhang, Pisak Chermprayong, Talib M. Alhinai and Robert Siddall under the lead of Mirko Kovac. The Aerial Robotics Laboratory there has a strong focus on building bio-inspired flying robots or drones as some would say. The only difference would be that a robot could have capabilities to steer on their own while a drone is more or less remote-controlled.

How does this work?

This concept, known as SpiderMAV, shoots anchor thread, using high-pressure gas, which connects the drone with a surface, such as a building wall. Once it hooked up with a surface, it will perch and ultimately stabilize itself in the air. It will then hold its altitude without tumbling around in the air too much. If it can connect to more than one surface at the same time, for instance when it’s flying into a corner, it will increase this effect even more. It can also perch to the ceiling and “rest” there without wasting battery power.

Evan Ackerman, from IEEE Spectrum, writes, “SpiderMAV was inspired by a kind of orb-weaver spider known as Darwin’s bark spider…”. He further reports that “SpiderMAV isn’t quite as well integrated as the spider; it’s essentially a DJI Matrice 100

drone with a customized perching module mounted on top and a stabilizing module at the bottom.”

What could that be good for?

Next to just improving product quality and user experience, there are some use cases that directly come to mind. For instance, photographers and videographers that utilize drones for media production could anchor their drones for more stability and therefore increase the quality of photos they take or video footage they might record.

Perhaps DJI, GoPro or another drone manufacturer will pick up on the idea and include an anchoring system in future aerial drone models. Many of their customers are highly interested in capturing high-quality media with the drones, so they should think further than just including good cameras. Perhaps this will introduce a new standard.

Photo credit: Imperial College London / IEEE Spectrum
Source: Evan Ackerman (IEEE Spectrum)
Editorial notice: Outgoing links to Amazon pages lead you there via affiliate referral code. You don’t have to pay any more if you choose to buy products, but if you do, we might receive a small percentage of the revenue which helps us to keep the site running.

Christopher Isakhttp://www.christopherisak.com
Hi there and thanks for reading my article! I'm Chris the founder of TechAcute. I write about technology news and share experiences from my life in the enterprise world. Drop by on Twitter and say 'hi' sometime. 😉
Previous articleAmazonSmile: Donate While You Shop, at No Extra Cost!
Next article22 NeuroTech Companies That Want to Hack Your Brain

Muskthrust Introduces One as a Personal Aerial Vehicle