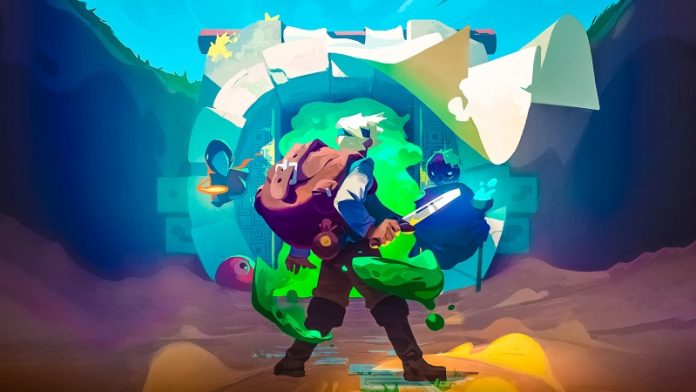 Moonlighter is the name of an old shop that you are now manager of. In the game that shares the store’s name, you are Will, a young storekeeper who sells goods throughout the day and then goes monster hunting in dungeons at night. Sounds promising, right? Let me tell you a bit more about it.

A fantasy that became a reality through a Kickstarter campaign

Moonlighter has been developed by Digital Sun and was published by 11 Bit Studios. Judging from the credits roll, the game was crowdfunded through a Kickstarter campaign and they made sure to add the name of every backer there. If I had to describe Moonlighter in a single phrase I’d call it a fantasy storekeeping simulation and ARPG roguelike hybrid but fortunately I have a whole article to share my thoughts about this game with you.

The game is split into two primary aspects. You are the owner of a store in a cute fantasy village and try to make some coin in order to upgrade your place or parts of the whole village. On the other hand, at night you venture through the depths of mysterious dungeons, slay monsters, solve riddles, and collect loot – which of course is then sold in your shop or used to create items. All the items you discover are new to you and until sold, you are unaware of their popularity or value, so you’ll actually need to arrange the pricing yourself and keep notes, to make sure you’re always hitting the sales sweet-spot with your goods.

Over time you get better gear, grow stronger, improve your shop and the whole village in good, old RPG manner. There is no character leveling and you can’t get any skills as you progress but you will feel a difference when switching to better gear. Even having spent many hours into the game, I never felt like a character leveling mechanic was missing. On the contrary, improving up solemnly by getting better at the game and improving your adventurer equipment might be even more realistic than spending experience points on new abilities.

While the game follows a solid roguelike conception for exploring dungeons, it still delivers an interesting plot and storyline to follow. I found that even though you cannot create your own character, the playable and non-playable people in the game are quite lovable and felt rather unique to me. I can’t stop playing and I love it!

Also check the video we’ve made for you

Moonlighter is available for PC, Xbox One, PlayStation 4, as well as the Nintendo Switch. Pricing varies on version and platform but it’s roughly around $20 normally, which I find to be a very fair price.

If you’d like to see some more of it, feel invited to check into the video below, which features my first two hours of Moonlighter gameplay. In the beginning, it can be hard but as soon you find gear suitable to your playstyle you’ll grow more comfortable with fighting all the mobs and bosses. Enjoy!

Photo credit: All materials shown are owned by Digital Sun as well as 11 Bit Studios and were provided as part of a press kit.
Editorial notice: The author has spent about 14 hours in the game before writing this review.

Christopher Isakhttp://www.christopherisak.com
Hi there and thanks for reading my article! I'm Chris the founder of TechAcute. I write about technology news and share experiences from my life in the enterprise world. Drop by on Twitter and say 'hi' sometime. 😉
Previous articleNoom: Keeping You on Track to a Healthier Lifestyle
Next articleRobot Dogs: The Future of Automated Delivery?

Gamescom Award Winners and Other Highlights