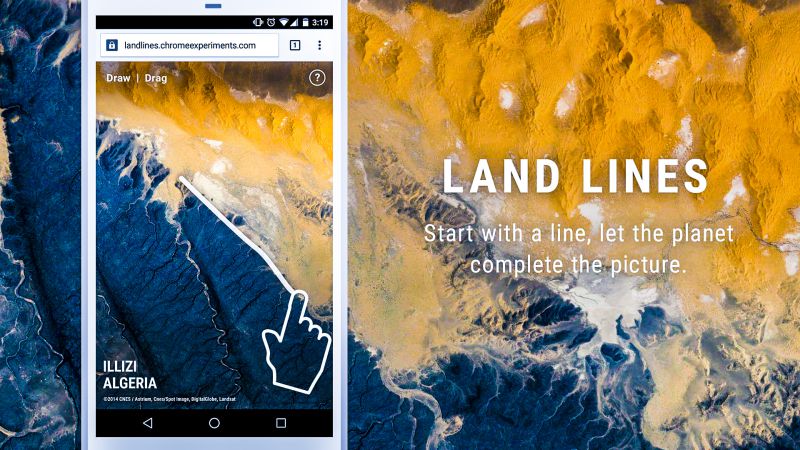 It’s early in the new year, and we already discovered a fascinating project. Land Lines is an experiment by Zach Lieberman, Matt Felsen, and the Data Arts Team at Google. If you think the naming suggests a new VoIP or WebRTC solution, you’re way off, though.

This experiment is about using Google Earth satellite imagery to match particular touch input commands. And they do that at a remarkable calculation speed that could nearly be considered as real-time. This project is part of the Chrome Experiments portfolio and to achieve drawing and dragging input mapping, they used a combination of OpenCV Structured Forests and ImageJ’s Ridge Detection for line detection.

To look up data this rapidly they made use of a vantage point tree to match user input better, and they used Pixi.js, built upon the WebGL API, to draw 2D WebGL graphics without impacting performance. The image data set is hosted in the Google cloud.

You load up Land Lines in your Chrome browser, desktop or mobile version, and can choose between two modes:

You draw a line or curve on your display, and the system will instantly load a geographical location that matches your input. The shape in the matched location will resemble of the same input you provided. It’s quite exciting where you will end up, as you draw your lines into the screen.

Drag through a variety of locations. As you keep dragging and changing your input direction, the system will load up matching streets as if you rode through them. This happens at a speed that is nearly real time, and the result is just beautiful. I wish I would have this as a screensaver in a randomized mode.

It’s quite fun to play with Land Lines. The rapid response and curious results make for a great tech demo and could be a milestone on the path to something bigger. For more info check out the technical case study or browse the open-source code on GitHub.

Christopher Isakhttp://www.christopherisak.com
Hi there and thanks for reading my article! I'm Chris the founder of TechAcute. I write about technology news and share experiences from my life in the enterprise world. Drop by on Twitter and say 'hi' sometime. 😉
Previous articleThese Wooden Rubber Band Guns Look Awesome
Next articleSetting up a Raspberry Pi Multicast TV Server [Video]

Jaybird: Check out These Earbuds for Sporty Folks