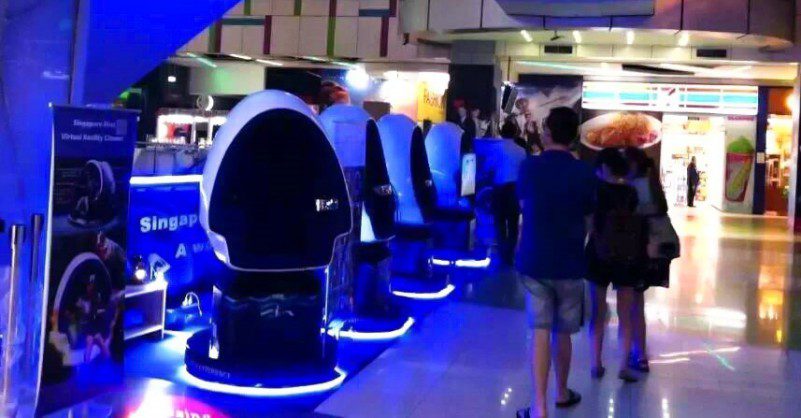 Virtual Reality (VR) has been taking over mundane gaming nowadays. Well, it seems to try at least. Sure, it may not be like we’re actually inside the game but it brings us one step closer to the future we’re yearning for.

Various VR headsets have been going out in the market: HTC Vive, Oculus Rift, Sony PlayStation VR, and many more. There are games designed to be played with a VR headset along with wireless joysticks for better experience, although there are also games that can be associated with VR even if they weren’t originally designed for it.

But let’s get to the main point here. There is now something we call VR “capsules”, “eggs” or “VR machines”. Do not get me wrong, they are not the simple trial VR setups displayed in malls, so you can examine the product.

Those samples only consist of a normal VR headset and a widescreen TV where people around you can see what you are seeing and laugh at you for your hilarious reactions. No, these VR capsules might even replace amusement parks as we speak. Beyond VR they are going to provide your experiences in nine dimensions (9D).

They are usually grouped into four chairs facing away from each other, two chairs next to each other, or just your simple solo ride. You get to choose what VR experience to go through. There are roller coasters, space exploring, movie related experiences, and of course, the very popular horror VR content.

These are made by the company themselves, but the movie franchises are sponsored. You sit in one of the bubble chairs and swoosh you’re off! You pay for each ride you get. These capsules here, in the Philippines, are distributed by Chinese companies like “vgames” or “Longze“. It was adapted by a financial corporation in the Philippines, and is now getting franchises in all kinds of places.

It’s really fun to ride on or if you’re on the other side watching your friend ride it, make sure to prepare your camera for her / his hilarious reactions. This trend isn’t really rampant internationally yet, but I’m sure the 21st century will adapt to this in no time.

Tell me what you think about this cool new innovation! Would you ride it?

YouTube: vgames at the Mall | Virtual Reality (by Jacque Line)

Ela Denise Buendia
Hey, thanks for taking a look at my article! I'm Ela, a very passionate creative writer and student. I am currently studying to get a degree in the field of arts. I love writing, and reading comes along with that. My other hobbies include: singing, drawing, watching anime, and of course gaming. Make sure to check out my other articles and don't hesitate to drop by my social media account. Have a fabulous day!
Previous articleCould the Tesla Model 3 Really Shake up the Electric Car Market?
Next articleYour Mood, Opinion and Decisions Are Shaped by Invisible Influences

What If Websites Would Be like a Real Life Office? [Video]