Hyperboom: Bringing the Boom to Every Party 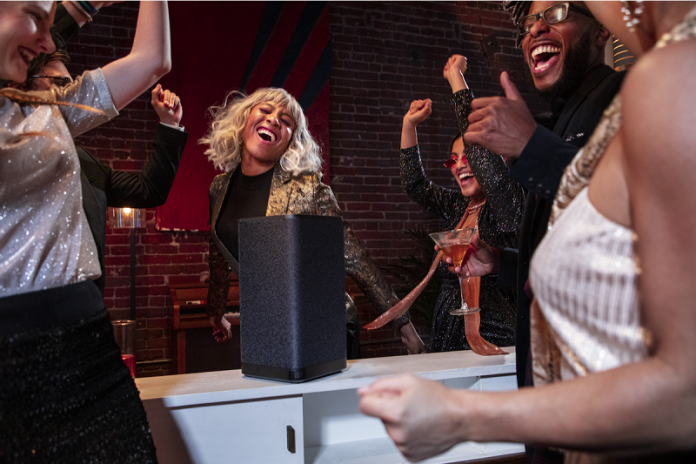 Logitech’s Ultimate Ears is a well-known company for manufacturing in-ear monitors, speakers, and earphones, which is based in California, United States. Recently, they’ve announced that it expands its line of Bluetooth speakers with the launch of the Hyperboom speakers. According to them, this is by far their “loudest and bassiest speaker yet”. The company claims that its latest speaker will keep any party going with its booming bass.

Massive sound and extreme bass to any party

According to Ultimate Ears, Hyperboom rocks triple the loudness and more than six times the bass of the Megaboom 3. This new speaker is popular on its own and doesn’t need any hype, boasting of having a wide dynamic range that brings music to life. Moreover, the Hyperboom speaker has a rechargeable 24-hour battery.

Hyperboom supports four input sources – two Bluetooth, one optical audio, and one 3.5mm auxiliary source. This allows people to play music from any type of device whether it’s a smartphone, gaming console, or laptop. Also, you can easily switch from one device to another with just a press of a button. It also has an adaptive EQ which allows people to use it in any type of environment. The speaker will automatically adjust the sound to fill any space.

There are numerous benefits that the Hyperboom speaker offers. I’ve already mentioned a couple of them, but here are some more. As the company claims, Hyperboom has an IPX4 rating, so it can withstand pool splashes or drink spills. Also, it is party-proof and allows phone charging. Furthermore, Hyperboom has a One-Touch Music Control feature, which allows you to play, pause and skip songs directly on it. It also allows playing music from Spotify for Android, Apple Music, Amazon Music, and Deezer Premium.

Increasing the signature of their well-known sound

Ultimate Ears’ Head of Product Management Mindy Fournier says that Hyperboom takes the company’s signature sound to make it bigger and louder than ever. She shared that the new speaker is going to fill huge spaces with people on their feet dancing. Their main goal with this speaker is to gather together people to party and enjoy some good music.

Hyperboom has a beautifully rich sound with its thumping bass and phenomenal dynamic range at any level. Fournier has also mentioned that they added party-ready features in this speaker, such as 24 hours of battery life, easy music sharing, and adaptive EQ.

Hyperboom is supported on the Boom application that is available on the Google Play Store and the Apple Store. You can set your favorite playlists, turn the speaker on and off, adjust volume, and much more with the Boom app. You can also connect your Hyperboom speaker with other Hyperboom or any other Boom or Megaboom speakers, with the help of the Party Up feature. Hyperboom is currently available for sale for a retail price of $399.99.

Photo credit: The featured image is owned by Ultimate Ears and has been provided for press usage.
Source: Ultimate Ears Press Center